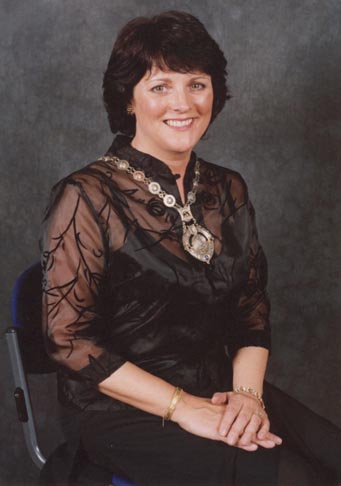 The Club’s greatest highlight since our inauguration in 1994 has been the election of Aine Brady as National President, S.I. Republic of Ireland at Federation Conference in Glasgow, attended by 11 of our members on the 31st October 2002. Aine had a very successful year as National President culminating in the ‘Friendship Weekend’ at the Johnstown House Hotel, Enfield, Co. Kildare with a Gala Dinner in the K Club in Sept. 2003 attended by the Minister for Finance, Charlie McCreevy, T.D. with Guest Speaker, Mary Davis, C.E.O. Special Olympics 2003 and representatives from all 23 Soroptimists Clubs including Marie Hoey, Regional President, Northern Ireland

At the Federation Conference in the Waterfront Hall, Belfast 26 Oct. 2003 Aine Brady handed over her Chain of Office to the new National President, Catherine O’Sullivan, at the Change of Insignia Ceremony, followed by dinner for 1,500 guests at St. Georges Market, Belfast

Aine Brady from Clane, Co. Kildare, was inaugurated as National President, Soroptimist International, Republic of Ireland at a function held in Glasgow on the 2 Nov 2002 which was attended by delegates from all over the world. This is a great honour both for Aine and the North Kildare Soroptimist Club. 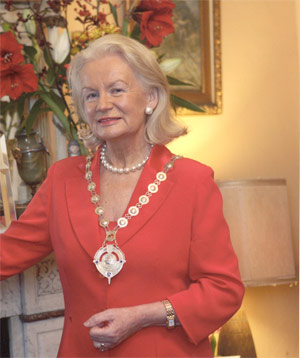 Kay Brophy was inaugurated as National President 2008-9 at the Federation Conference in Barados on 1st November 2008, attended by 12 club members and SO delegates from Ireland. Her ‘Friendship Weekend’ was held from the 3rd-4th October 2009 in N.U.I Maynooth, followed by lunch in the River Room, The K Club, where the final cheque for the National Project was presented to the National Rehabilitation Hospital, Dun Laoghaire.

Photos of these events can be found in the Archive page Events & Conferences.